Posted on October 23, 2013 by simpletravelourway

We strolled to Yangshuo Park in the late morning.  We expected a park with wide lawns, and, now, we’re not sure we saw any grass at all.  Children played on sculptural animals, rode amusement park rides, and ate sweets from a nearby stand.  Adults played cards or games at stone tables in the shade of trees.

We came to some trees near water and hoped to see some birds – any birds.  We did observe a number of birds on our trip across the U.S. earlier this year, but our bird watching in China was rare. We just did not see a lot of birds. We wondered why?  A little research gave us an answer:  The Four Pests Campaign in 1958 advocated the eradication of sparrows, along with rats, mice, and mosquitos, because sparrows ate grain seeds, reducing, for example, rice production.

As one of the first actions of China’s Great Leap Forward, the Four Pests Campaign succeeded with an unexpected outcome, a step backward. The campaign’s success brought a disastrous consequence for China. Without birds to eat the insects that harmed the crops, food production decreased, and the ecological balance was destroyed. Birds remain scarce today.

Still, we kept an eye out for birds.  As we continued our stroll in the park, we came to a construction area where, it appeared to us, new walls will be built along a stream.  We saw a quick flash of bright turquoise blue.  We stopped to watch. There it was!  A bird we’d never seen before – far distant – sat on an exposed root that was sticking out of the bare earthen decline to the stream.

See the flash of blue on the river bank?

The bird’s chest was orange, and it had a rather long beak.  He dove down into the stream and, in an instant, was back up on the branch.  The high mounds of construction dirt blocked us from getting closer, so we took a photo knowing it would never be good enough for a clear view, but, at least, would be good enough for identification.  We later discovered our bird was a Common Kingfisher (also called Eurasian or River Kingfisher). We had not seen this bird before today.

That evening we celebrated our bird discovery at a good Indian restaurant, Kali Mirch, in Yangshuo.  We ordered samosas and curry and a bottle of Indian beer. When the beer arrived we laughed at the coincidence.  The beer arrived, Kingfisher beer, with a picture on the can of our Kingfisher bird. We thought, “What a crazy coincidence!” 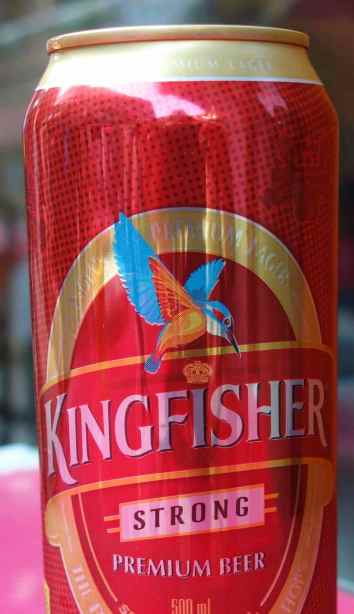 2 Responses to A Remarkable Coincidence