Posted on April 1, 2014 by simpletravelourway

Babies and little ones are endearing. Who can resist? The juvenile Australasian gannets charmed us. They sat in their high rocky nests with parents nearby for support. Soon the juveniles will be ready to take off from the cliffs at Muriwai, and, like many native New Zealanders of the human variety, they will be ready for an overseas experience, an “OE.”

For those gannets, they’ll spend the next 3-7 years cruising the oceans south of Australia before returning to this same rocky area of New Zealand to mate and rear their own juveniles. 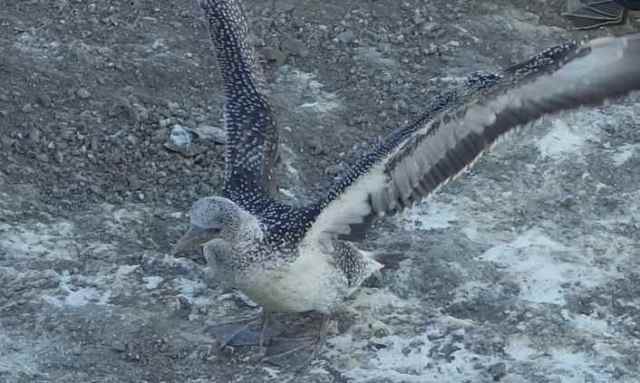 Juveniles are camouflaged on the rocks . This is a color photo.

We admired the Maori carvings and snapped lots of photos at the Arataki Visitor Center of the Waitakere Ranges Regional Park.  When we walked around one, we discovered a little wooden carved baby hidden to the side. 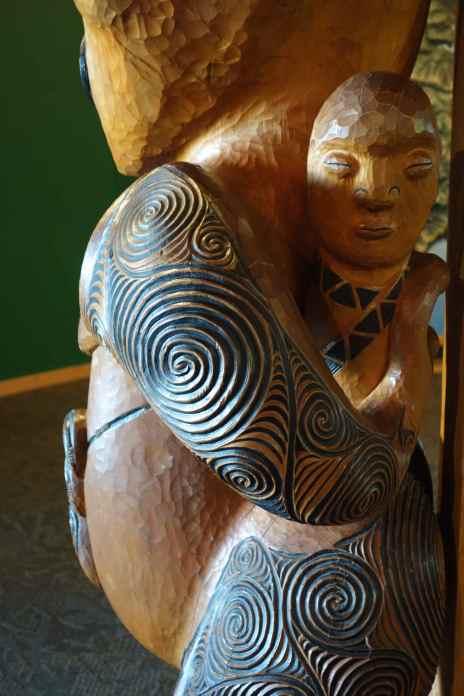 Also at the Arataki were terrariums with insects and small lizards found in the park.  We especially liked the (too cute) green and forest geckos. 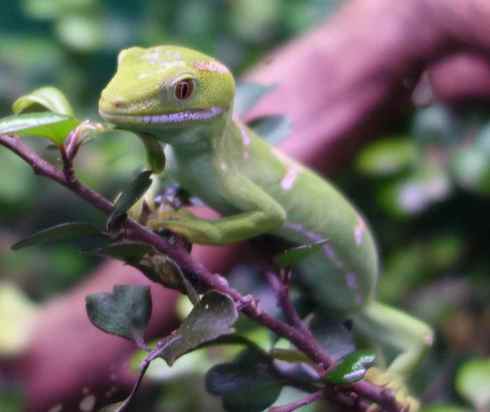 When we were growing up in the U.S., we used to see lots of monarch butterflies, but their numbers have dwindled in the U.S. in recent years with shrinking food sources and habitat space. So, the appearance of Monarchs in New Zealand surprised us.

We had seen a plant with little fluffy “balloons” in New Zealand and had no idea what it was.  A passerby told us it was a swan plant, and we looked it up to find that it is related to milkweed.  Days later, when we walked through a plant center with our NZ friends, Cliff and Ruth, we were shocked to see caterpillars devouring a swan plant in the nursery.  Ruth told us that we were seeing the caterpillars of the Monarch butterfly.  Of course!

She pointed out a chrysalis on a nearby stem, and there flying around us was the real thing – a Monarch butterfly.  So, in that one little spot in a plant nursery, we saw the Monarch chrysalis, caterpillar, and butterfly.  Turns out Monarch butterflies were introduced into New Zealand in 1871 and seem to be doing just fine in its environment.

We don’t often observe “little ones” and certainly not so many in one day. We had set off to just see the baby gannets, but, thanks to Cliff and Ruth, we saw a whole lot more.

1 Response to Little Ones