Our pick for top place to go in Melbourne

Posted on April 8, 2014 by simpletravelourway

As soon as we set the dates for our trip to Melbourne, Australia, we planned one special outing. We figured all other tourist destinations could be squeezed in if we had time, but our heart’s desire was to visit the Melbourne Water Western Treatment Plant. Yes, a sewage treatment facility. Why? That’s because it’s the place to see up to 275 resident bird species – over one-third of all the species in Australia.

We contacted John and Allison through birdingpal.org. They generously offered to guide us and 2 other visitors from the US, Jeff and Barbara, for the day.   How many birds would we see? We suspect John strives for 100 different species, which seemed impossibly high based on our limited experience.

We gathered in a wooded area by the side of the road to the Water Treatment Plant. John got off to a very fast start. “Musk lorikeets,” he called out and binoculars went up. We hardly had a second to look before John called out, “White ibis in the field over there.” We swiveled and took a look and tried to record what we’d seen, but not fast enough as he called out, “Little raven.” And so it went. This was speed bird watching at its very best. We could barely keep up with John. We had never been in a place where so many different birds could be seen without moving a step.

We knew the Melbourne Water Western Treatment Plant is a premier birding site in Australia, but we had no idea why or what it would be like. The facility, covering 11,000 hectares (42 sq mi), is 35 km southwest of the city and has been operating for over 100 years. “All natural treatment of the waste water,” we were told. “No chemicals.” Trees lined the entry roads, but most of the areas we visited appeared to be ponds and wetlands bordering Port Philips Bay. 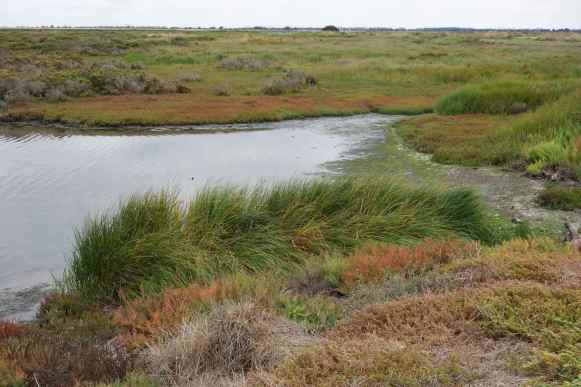 We raced through the morning, and, by my count, tallied over 60 bird species seen by the time we collapsed on to benches in a bird blind to eat our packed lunches.

We spent time in the afternoon looking at wading birds not easily seen. John set up the scope to aid viewing. We saw many uncommon birds. One was a female ruff, known as a reeve, a rarely seen migrant from northern Eurasia. 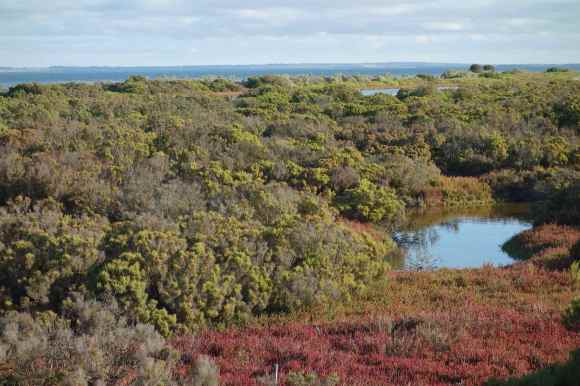 The perfect environment for secretive crakes and rails

We birded all day long and only stopped as the sun dropped in the sky. An early evening tally revealed we had hit the mark: 101 species viewed! John and Allison were great guides and the Water Treatment Plant was the best place we went in our visit to Melbourne.