Posted on August 3, 2014 by simpletravelourway

The White Mountains of Crete in the early morning mist

So, yes, after a little reading, a few facts surfaced that made us wonder, could we really do it? What gave us pause were the mid-summer heat, the 16 km length, the steep 1,250 m drop in elevation, and the rocky conditions of the pathway. We took time to think about attempting the hike.

A few days later, we discovered inexpensive hiking poles in a store and thought, “With poles, we can do it!”

Our iPhone alarm blared at 5AM, and, a half-hour later, we walked up to the bus station in the early morning darkness. 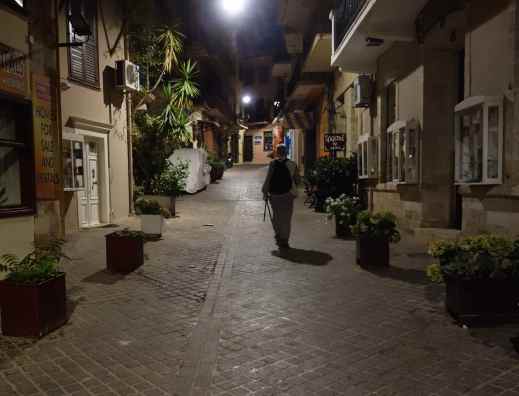 Starting out before dawn

Two public buses awaited passengers, and we hopped on the first, headed for the trailhead of the Samaria Gorge. Joe downed his motion sickness pill. Beth grabbed two front seats. The driver deftly maneuvered the huge bus through the narrow Old Town Streets of Chania.

Soon our bus climbed steadily up the White Mountains, and the scenery out the windows was so spectacular that we almost called out, “Stop the bus! We need to take some photos.”

In an hour the bus pulled up to a café and gift shop, with lines to the women’s bathroom that snaked through the place almost back to the front door.

We walked through the parking lot and stopped at the ticket office to pay our €5 per person park entrance fee. The map of the trail is conveniently printed on the back of the ticket, showing bathroom stops and water springs along the path.

The trail started with paved steps

We started hiking at 7:40AM in crisp mountain air and on a wide stone-paved path. The view of the mountains all around lifted our spirits as we hiked. Who said this would be difficult?

Soon the path deteriorated to a semi-rocky trail

The trail got rougher and our pace slowed. Rocks jutted out and were close together. Further down, the trail became steeper and the rocks were shiny and slippery. We both started to lose our balance, even with the support of hiking poles. Beth counted how many times she slipped (one, two, three…). On slip number seven she went down – hard – on her back. A little shaken but no damage done, so on we hiked.

The drinkable water along the way meant we could always get our bottles topped off.

A bridge crossed to the remains of Samaria. The residents were relocated when the area became a National Park in 1962.

We stopped at the site of the old village of Samaria for a well-deserved break. A guide came over and spoke to the couple seated next to us on a shady, stone wall. He gave them advice that we took to heart: make this a short break and hike now to get out of the canyon before the sun is high and the day gets too hot.

We quickly finished our shared spinach pie and set off, hiking with heads down, ever mindful of the rocks and our footing. In the distance several hikers had stopped, cameras clicking. We then saw a family of Cretan wild goats.

By this time we had descended quite a way into the gorge. We were hot and tired, and the path beneath our feet still heaved with rocks. Beth had fallen yet again. This was the moment we asked ourselves “Is a downhill hike really worth it?” ….to be continued with “Scenic, but dangerous”

6 Responses to It’s all downhill