Posted on May 20, 2015 by simpletravelourway

The relay race was on in Bend, Oregon! We missed the first three legs of the race, which started with a sprint up a hill, followed by participants donning skis and then skiing down LeeWay Run on Mt. Bachelor. That’s the pole part. Next was supposed to be an 8-km crosscountry ski leg, but, with too little snow, a run replaced the Nordic skiing. Then a 22-mile bike ride – the pedal part — followed, bringing the contestants to where we could see them.

We walked to the race course in time to join the other spectators along the course of the 4th leg, a 5-mile run.

The runners were on the sidewalk or park paths and almost looked like they were out for their daily jog (except for their race numbers).

Some participants dressed for the occasion.

The 5th leg was the paddle event.

The kayaks littered the field, awaiting the runners to arrive to claim their own, carry it a short distance to the Deschutes River, and set off paddling down the river.

Some competitors were solo and others competed as in pairs. 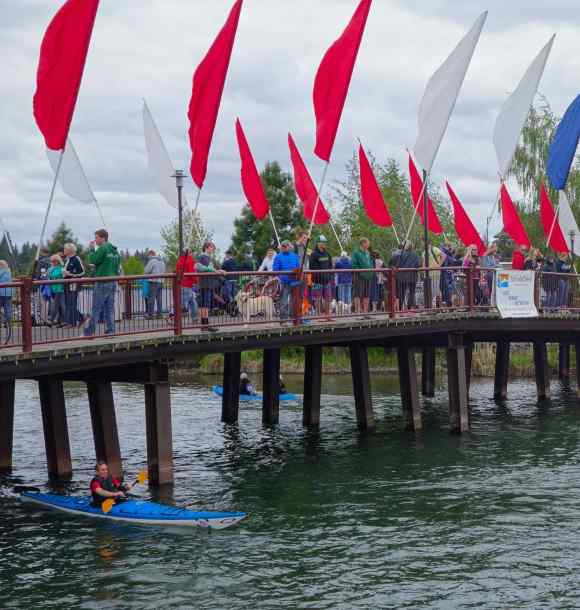 Spectators on the several bridges had great views of the competition.

The final leg was a sprint to the finish.

Bend, Oregon must be one of the best places to live for anyone who loves the outdoors and especially for skiing, cycling, and paddling. Bend’s also an inclusive place as evidenced by the range of participants in the race which included highly competitive athletes, those competing for fun, teams, families, and adaptive participants (with disabilities).

Pole pedal paddle was the place to be in Bend, and we celebrated the race along with everyone else in town. Well done!