Posted on June 3, 2015 by simpletravelourway

A forecast of rain on our last day in Bend, moved us to head for the High Desert Museum. We admit that, after years of living near the Smithsonian with its many museums in Washington, DC, we had doubts that a visit to a small town museum focused on the high desert was worth our time.

”The Battle“ by Rip Caswell was placed near the museum entry.

We arrived in time for the river otter talk. River otters are different from sea otters. As we listened to the museum staff talk we looked at each other and realized that what we had thought was a beaver swimming in the Deschutes River a few days earlier was actually a river otter.

It was clear when we saw the river otter at the museum that this was not our first encounter with one.

As we walked on a path connecting outdoor exhibits, we saw a sign that answered a question we’d had since arriving in Oregon. 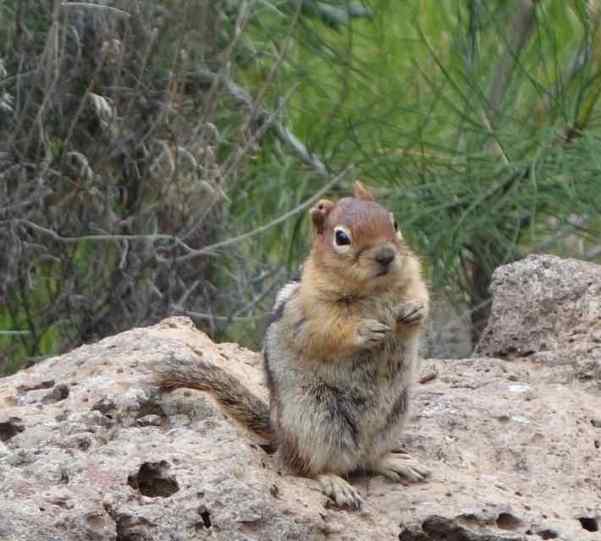 Is it a squirrel or chipmunk?

Now we know what to look for.

We walked through the “Spirit of the West” on an excellent guided tour of recreated scenes that helped us imagine life for early trappers and settlers of the High Desert. The one collection we’d go back and spend more time looking at was the exhibit on the Plateau Indian Nations. The collection was different from others we’d seen before and quite good.

The sign read “The basket hat distinguishes Plateau culture…Basket hats are revered family heirlooms and may be passed from mother to daughter, carrying tradition with them…The beaded portrait is from the Umatilla Reservation.”

A nod to the area’s thriving breweries, the Museum’s current exhibit was on brewing beer.

A recipe for making your own.

The High Desert Museum proved to be a great visit, and we were surprised just how much we learned. There was one troubling exhibit for us though. Why would a relatively new museum have a wild animal in what appeared to us to be a too-small glass enclosure?

A bobcat, raised in captivity, now lives in the museum.

3 Responses to Our rainy day activity