Posted on July 28, 2016 by simpletravelourway

Our last day in Quito came too soon. We still had many places on our “to-do” list but only had time for one more. Narrowing the choice down was easy: a visit to Casa del Alabado.

One of our interests in coming to Ecuador and Peru was to better understand the pre-Columbian period. What could we learn about the people living in these areas before the Spaniards arrived?  We started by looking at their faces.

The Casa del Alabado has a stunning collection of pre-Columbian art in a well-designed space – the perfect place to spend our last day in Quito.

The works from the northern area of Ecuador, bordering the Columbia border, were of sacred animals (like jaguars and monkeys) and of seated people under the effects of the coca drug.  Carchi-Pasto 750 CE – 1550 CE

The Manteño-Guancavilca civilization was the last of the pre-Columbian civilizations and was never conquered by the Incas. They lived on the coast near the present-day city of Manta. They were deep-sea divers of Spondylus, which they traded with the Incas. 1100 CE-1520 CE 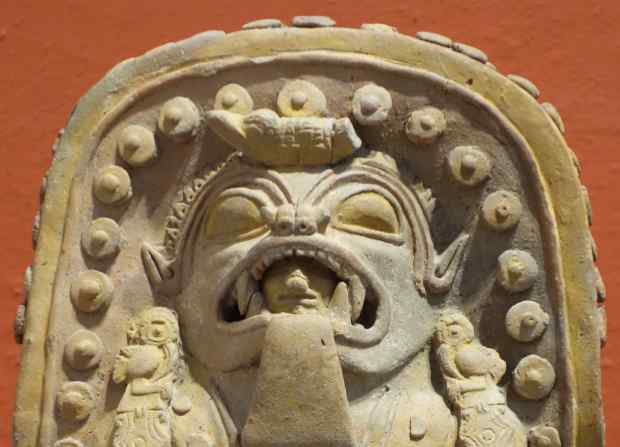 The person is barely visible inside the mouth of a huge ceremonial mask with depictions of animals and birds.

This piece was from the mountainous areas of the Cosanga or Panzaleo civilizations, where the principal occupation was growing corn and yucca. The full cheeks on many of the ceramic figures are from chewing coca leaves. 500 BCE – 1550 CE

The simplicity of the figure is striking, with his ornamentation and (what we assume is) an offering in the bowl he holds out. Unfortunately, we didn’t record any information about this work.

Right before we left the museum we saw a well-documented book about the collection at Casa del Alabado. Oh, to have more time to carry that book with us very slowly through the museum and read more about the works we saw!

4 Responses to Old Faces of Ecuador