The travel experience you want to avoid

Posted on September 9, 2016 by simpletravelourway

When we went to Manu Biosphere Reserve in the Amazon Basin of Peru for 9 days, we took every precaution to avoid getting sick, but, even though we used a high percentage DEET lotion on exposed skin, dressed in long sleeve shirts, high collars, long pants, and socks with our boots, and slept under mosquito netting every night, we still were covered in bug bites. It was a mystery to us how we got all those bites.

One of the bites on Joe’s leg just didn’t heal. He watched it not heal as we visited Machu Picchu; get worse as we visited more Inca ruins in the Sacred Valley; and develop shooting pain in his foot after settling back into Cusco. There was no choice but to seek medical help.

In over 3.5 years of constant traveling, this was a first for us. By the time Joe decided he needed to see a doctor, the pain dictated we do it sooner than later. Beth did a cursory quick search on the internet, and we hopped in a taxi and rushed to Clinica Pardo.

We looked around at all the people seated in the reception area. We prepared ourselves for the challenge ahead. Not a tourist in sight. Our Spanish included no medical terms. We had no idea what to do.

A kind woman who worked at the front desk spoke English and walked us through the paperwork, seeing the doctor, getting the blood and urine tests. We were never quite clear what the diagnosis was but weren’t surprised that the recommended treatment was IV antibiotics. 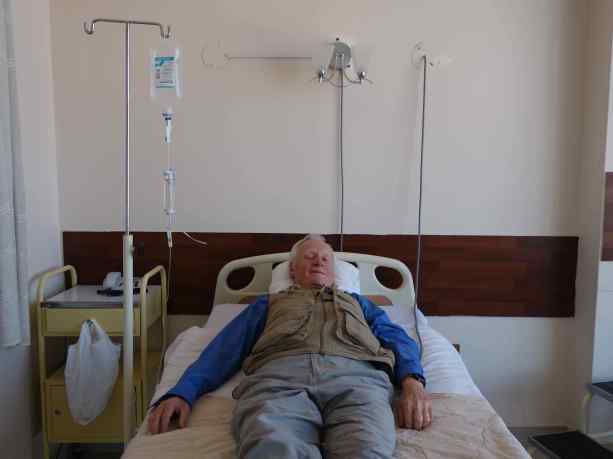 We went to the pharmacy and bought the drugs and all the equipment to set up the IV. Joe was given a bed in a 9th floor room with a great view out to Cusco, and the IV was set up.

The drip finished and no one came. We were ready to leave. Then, an aide came in and detached the IV, mysteriously leaving the needle in his arm before she left. We waited. After 15 minutes Joe rang his buzzer. More waiting. After a long time a nurse came in and set up a 2nd IV.

Long after that IV bag had emptied, the same thing happened again. Beth checked the drawer containing the purchased drugs and discovered two more full vials. At this point, we had been at the clinic for over fours hours with nothing to eat or drink. We were very tired. We both understood that the English-speaking staff person had told us it would only take an hour.

Joe rang the buzzer again. This time, with another English speaking staff to help us, we tried to talk to the doctor and nurse about what was happening. They explained Joe needed to wait till 10pm for the next IV and then we could leave. Certainly there had to be another option, we asked in exhaustion. So, the doctor prescribed pills for Joe to take over the course of 5 days, with the request to see a doctor in a month when we got to Argentina.

The pain and wound were only slightly better after a week, and it was time to continue our trip, first to Arequipa, and then on to Colca Canyon.

Joe cleaned the wound one morning and decided to let it dry in the sun on our patio. “Come and look at this,” he said. “Do you see what I’m seeing?”

Was that a little maggot peeking out of the wound? Yes, it was!

A quick email to our guide in Manu, Danny, confirmed that it was the maggot of a botfly. Yuck! In one of the more bizarre moments of our lives, there we sat on a beautiful patio in Peru, looking out to the Andes Mountains and pulling up a youtube video on how to remove a botfly maggot.

In the end, we followed Danny’s advice and used the masking tape technique. 24 hours later the maggot was weakened but not dead and Joe deftly pulled it out with tweezers. A few days later, a second dead maggot was also pulled out. Four ended up coming out before it was all finished.

What a souvenir to pick up from our visit to Manu! It was a travel experience we never wanted to have but will make a great story to tell for years to come.

24 Responses to The travel experience you want to avoid