Time for a relaxing walk through the park

Posted on December 17, 2017 by simpletravelourway

Does anyone besides us sometimes feel that sightseeing can become overwhelming and what’s needed is to take a step back – a BIG step back? We had visited three great sites in three days, and it was time to take a relaxing stroll where we wouldn’t be overwhelmed. If we learned something new that would be great, but, mostly, we just needed to relax and enjoy what we had already learned.

We planned the day as an antidote to those big sightseeing days: to spend a quiet morning walking through the garden of the Alcázar in Córdoba and smell the flowers. (Would there be any?)

We couldn’t resist and detoured into the building itself, erected in 1328 as a military fortress.

When we stood on a rampart and looked down at the grounds, we noticed a woman who looked like she had stepped out of the Alcázar’s past. (Later we saw her speaking to an attentive group of schoolchildren – which explained a lot.) 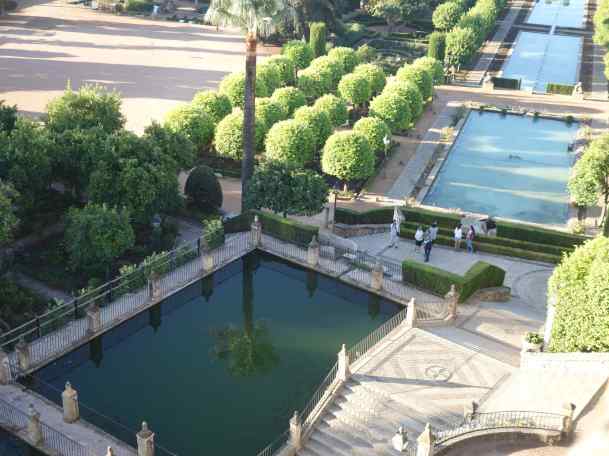 High walkways in the Alcázar overlooked the entry and the gardens, lined with pools and lollipop-pruned orange trees.

What was the origin of the Alcázar? The original fortress, built by the Visigoths, was torn down and replaced by emirs after the Muslims conquered Hispania. It must have been a grand palace in the 12th century – with extensive baths, gardens, and the largest library in the West. Then the Christians regained control. By the time of the Inquisition, it was used as a tribunal and torture chamber.   It did put a taint on the Alcázar after learning its sad past. Time to exit the building and explore the garden. 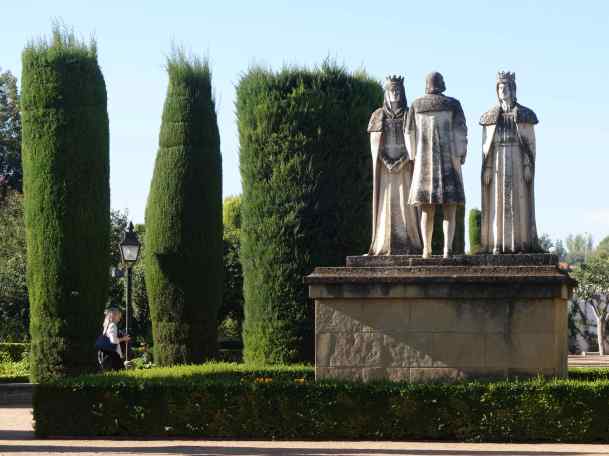 A surprise awaited! We knew few historic figures in Spanish history, but we did know King Ferdinand II of Aragon and Queen Isabella I of Castille. And there they were in this garden that once was theirs, and where they met with Christopher Columbus before his voyage.

Napoleon Bonaparte’s troops used the Alcázar in 1810. Soon after it became a prison. Today the Alcázar is part of the Historic Center of Córdoba – declared a World Heritage Site by UNESCO. 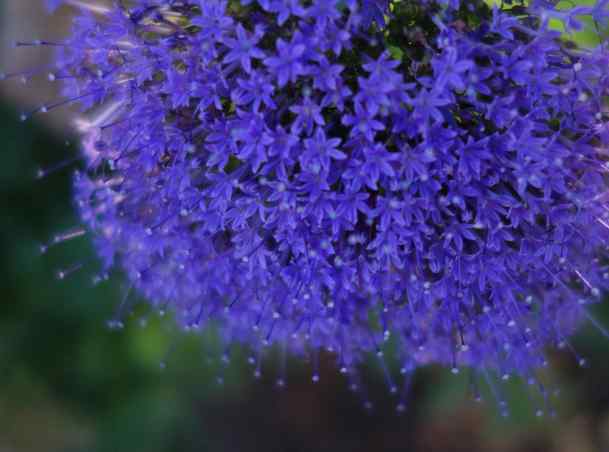 The garden flowers were past their prime so we could only imagine how glorious this garden must be at its peak. Still, every good garden has features of interest throughout the year. The color and little DOTS shooting off this flower qualified it as worthy of a photograph.

We stayed in the garden long enough to be on the lookout for a place to rest.

What exquisite care and design went into details like the garden steps!

We imagine that what we saw was the “formal” garden but that other gardens extended beyond the current walls many centuries ago. After we left the Alcázar, we walked along the river. Birds stayed at a distance, and the undergrowth was wild so we mostly stayed on the sidewalk and just observed.

History informs us that the Alcázar rose to its most glorious in the days when the Muslims took great care in developing the building and gardens. The lowest point must have been during the Christian-led Inquisition.   Something to ponder on our stroll through the gardens…

8 Responses to Time for a relaxing walk through the park