Waterfalls, bears, and butterflies – in that order

Posted on February 11, 2018 by simpletravelourway

When we heard about a much-visited waterfall near Luang Prabang, Laos we were puzzled. Really? A waterfall? It just wasn’t what we imagined we’d go to see in a UNESCO World Heritage Site city. When we looked online to learn more, we had the impression of a destination where the backpacker crowd frolicked in the water of a modestly small falls.   The place sounded too crowded to enjoy.

As we travel, we try do some new things that we wouldn’t normally do “back home.” So, with our friends, Cliff and Ruth, we piled into a comfortable van and headed out to see the Kuang Si Waterfall for ourselves. It was a scenic, one-hour drive through the countryside.

Arriving at the falls, we each paid the entry fee and then studied the map of the falls area. We hadn’t realized that the falls drops into a pool and then cascades down into two more pools before flowing on. 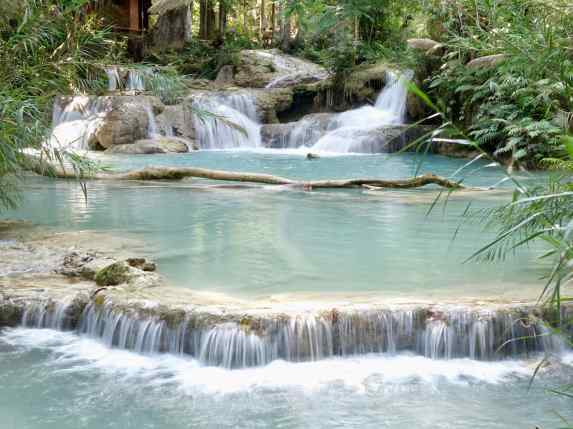 When we reached the lowest pool we were delighted. The mountains in Laos are limestone resulting in pools of water being a wonderful light turquoise blue.

We arrived in the mid-morning, not yet too hot. Only a handful of people were in any of the pools, and those in the water seemed to be intent on taking selfies.

We had fun photographing the middle pool: taking a photo or two and then adjusting the shutter speed to slow the water down bit by bit to see the effect. 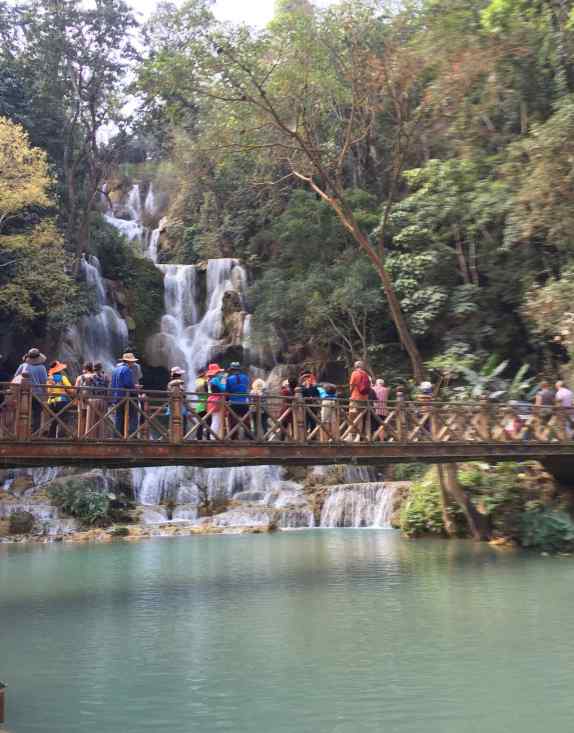 The upper falls finally appeared, as did the mixed-age crowd on the bridge. We actually like having the tourists on the bridge, with their brightly colored outfits, pushing toward the center of the bridge for the best view.

On our return walk down, we spent some time at the Bear Rescue Center run by Free the Bears. We watched the Asian black bears, also called moon bears because of the crescent-shaped white color on their chests. They are classified as “vulnerable” not only because their habitat is shrinking but also because poachers hunted them to fill bile farms for traditional Chinese medicine. 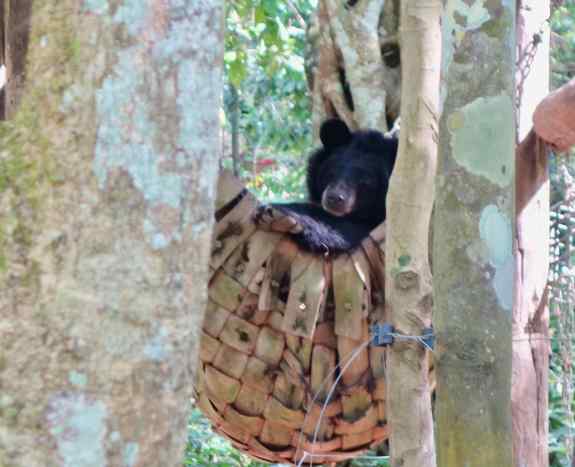 While most of the bears were playing, we caught sight of one bear through the trees, relaxing in a large basket.

To end the visit we stopped at the Kuang Si Butterfly Park nearby – but that’s a story (and photos!) for another day.

We’d hoped the waterfalls would be worth the trip, and they most definitely were. The addition of the bears and butterflies made the trip all the more memorable.

6 Responses to Waterfalls, bears, and butterflies – in that order