Travel plans for what to do? Not much.

Posted on October 26, 2018 by simpletravelourway

We have our travel destinations planned out for a year in advance, but, if you ask us what we plan to do while we’re at most of them, we don’t have a clue.  We had booked our next stop at a modest AirBnB in the Hyannis/Barnstable area of Cape Cod.  Ocean close by: Check.  Lots of seafood meals: Check.  Bird watching possible: Check.  What more did we need to know?  It would be soon enough to research online “what to do” attractions in the area after we arrived. 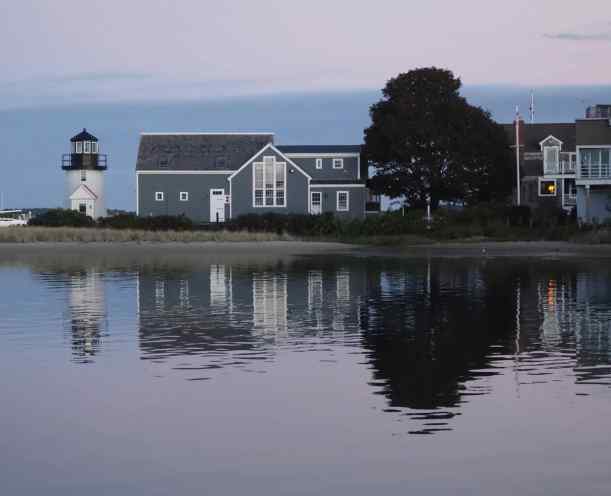 Our first evening in Hyannis, we walked down to the harbor where the ferries depart for islands nearby.  We were enjoying the calm water and the sky at sunset…

…when the first ferry glided in without a sound.

After a few days we decided it was time to see if there was anything compelling for us to do in the area.  We looked at the list on tripadvisor, and one place stood out as a must-see for us –  the home of Edward Gorey.

Gorey was a well-known artist and writer with a tendency to emphasize creepy mysteries in a Victorian setting.

We browsed through the collection of his murder mystery art and enjoyed his macabre humor.

His art medium was a pen with unmistakable drawings using hatch and crosshatch styles.

The house contained his many collections – books (and more books), frogs, medallions to wear around his neck, discarded items he found on the side of the road.  He was an eccentric man who wore a full-length fur coat for years and attended the ballet almost daily when he lived in New York City.  He bought a large teddy bear for himself at FAO Schwartz.

He had opinions on life, which have now been hung in the kitchen of the house where he lived the last 14 years of his life in Yarmouth Port, Massachusetts.

After visiting the Gorey house, we took a walk in his neighborhood, by the old church and down a road along the bay.  Birds were plentiful so we drove back another day to see birds at Sandy Neck State Park (also known as Bodfish Memorial Park). We walked along the wetlands, protected from the biting northwest wind.  After miles of walking, we took an established path to the beach.

The wind chill dropped with very step as we approached the exposed beach.  It was freezing cold as we took about two minutes to survey the long beach on either side of us with not a person in sight.

Despite hats, gloves, scarves, 2 jackets, and even long underwear – we raced back to the protected path and started the long walk back to the car.

The week in this area of Cape Cod was a relatively simple week.  Many travellers would be mortified that we didn’t take advantage of more popular touring sites.  Sometimes less is more.

9 Responses to Travel plans for what to do? Not much.