Posted on September 29, 2018 by simpletravelourway

We followed the highway from Grand Marais, Minnesota aiming for Thunder Bay, Ontario when we took a turn off onto a narrow, rough road in the middle of nowhere. These are the times on our trip that we wonder: have we made a mistake? Will this side trip to photograph wildflowers and watch birds be worth the effort?

Some many miles later, the road ended at Lake Superior. We’d arrived at our destination, the Hurkett Cove Conservation Area, an area well-known for its many bird species.  As we headed down the forested path, we heard birds calling. Edging the path were the same few wildflowers we’d already been photographing for several days. Suddenly, no birds appeared, and no new wildflowers were to be found. What a discouraging trip, we thought, until…

…we saw a grouping of mushrooms. For joy!

Once we spotted our first, it seemed that there were many more mushrooms, lichen and fungus in this forest. So, the planned photography outing for birds and wildflowers ended before it began, replaced by photographing what was at hand.  A total change of subject.

Are these the same type of mushrooms we normally eat? We knew enough to not even think of trying to test them out.

A metallic brown mushroom in the dark woods was surprisingly tricky to photograph.

The trees around us had their own photographable wonders. 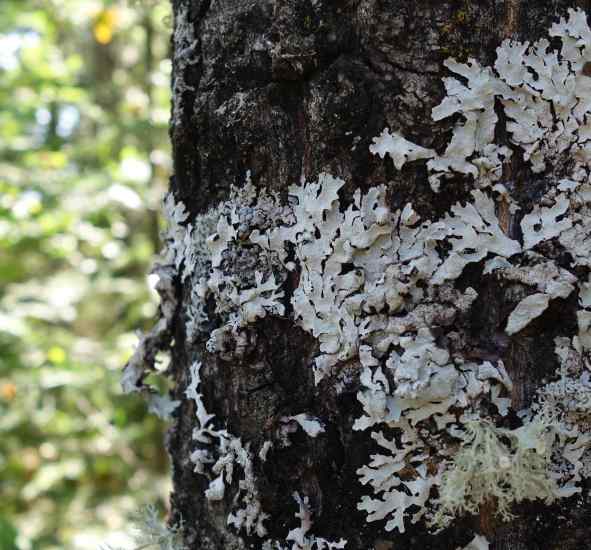 We appreciated the pattern of the lichen on the almost black tree bark.  Could this be common greenshield lichen with a bit of oak moss (in the lower right)?  Since there are 15,000 lichen species, those are just our wild guesses.

One decaying log had an amazing growth (of whatever it was). Doesn’t it look like a sponge from the ocean? For scale, note the little pine needles in the foreground. 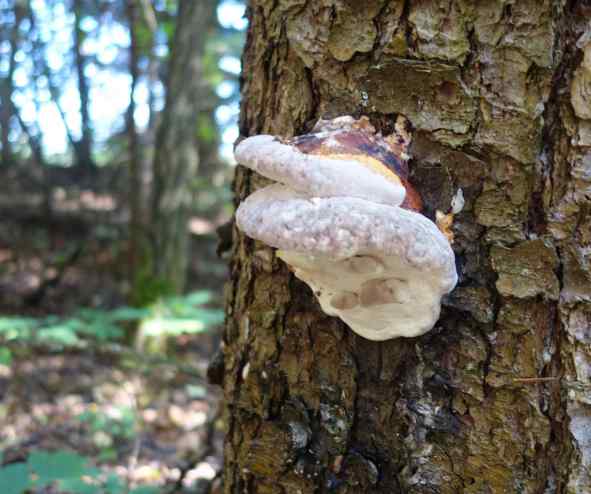 Fungus on a tree can indicate a disease and the host tree certainly looked unhealthy.

Most of the Lake Superior shoreline we had seen was rocky, but the water at Hurkett Cove was shallow with tall grasses and reddish sand.

With a change in the subject of our photography outing, we had lots to material to work with. That was exciting, but also challenging. Taking photos of small objects in the dark forest requires more research, practice and experimentation.

How to photograph mushrooms in a dark forest? Bringing along a little tripod would help (if we had one).  We should also experiment with throwing a little light on the subject.  Next time we’ll try the “fill flash” option on the camera.  One piece of advice was to carefully position the camera to focus on the mushroom without using any zoom.  This would require getting down on the (sometimes muddy) ground.

No doubt that the next time we make a trip out, now prepared to photograph mushrooms, the conditions and subject matter will be different.  We’ll find ourselves, once again, taking photographs of birds and wildflowers with nary a mushroom in sight. So, what is the moral of the story?  Be ready for change ahead. It’s good for a photographer to anticipate.