Travel through a fog

Posted on October 8, 2018 by simpletravelourway

A year before our road trip across the US and Canada, we started selecting destinations that we really wanted to see as we worked our way from the Pacific to the Atlantic. Bet you’d be surprised that little Amherst Island in Lake Ontario made our final list. It’s an excellent location to see birds, particularly raptors and owls in the winter.

This destination required a lot of preparation ahead of time: researching birds we might see, consulting the ferry schedule; downloading a map of the island with specific instructions of where to look for birds as we drove around the island; packing bird book, binoculars, and snacks as there is no place to buy food on the island.

The night before we had decided to get an early start (as birds would be up with the first light), but, when the alarm went off, we struggled to get out of bed and ready to go.  As we opened the motel room door, we stepped into a thick fog.  What a surprise!  Our immediate second thought: how could we watch birds in the fog?

By the time we got to the ferry dock the sun was up, but the fog stubbornly hung on.

We reasoned that by the time the ferry crossed the water and landed on Amherst Island, the fog would certainly have lifted.

A half hour later as we drove down our first road on the island, this was our view. We could hear birds, but, except for a few in tall grasses literally at the roadside, we couldn’t see any.

When the fog finally started to lift, moisture hung on the spider webs, creating a sparkly effect.

Birds started to appear, though not always as clearly as we would have liked.  Out of the last haze we saw a very large white bird swoop over the car and not long after a gull came by, much smaller in comparison.  We later found out we were in the area where one juvenile snowy owl has been hanging out – so maybe that’s what we saw?

Our last stop of the day was saved for the best place to see owls on Amherst Island.  The road there had a caution sign posted. A local woman had warned us the dirt road was not in good shape so we parked off the main road and walked in.

Several cedar waxwings settled on a nearby tree, and then we spotted a bronze-hued leopard frog sitting not far from a puddle. 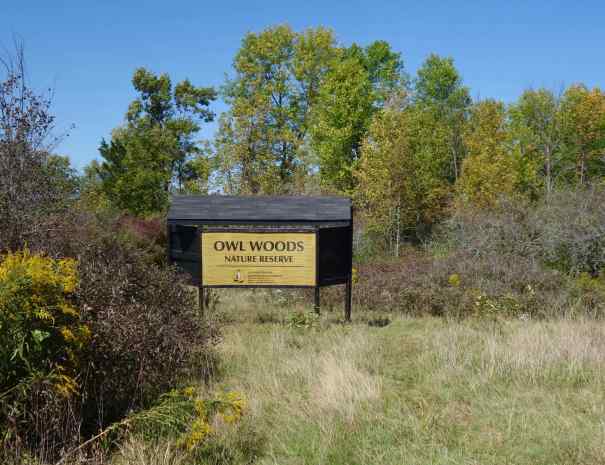 At last, we arrived at the Owl Woods Nature Reserve.  No one else was there.  We heard a few birds calling so we walked slowly, while we carefully scanned the tree branches overhead for an owl.

It’s never been our talent and only on rare occasions have we seen an owl without someone else pointing it out.  No matter how hard we looked, we saw not a one.  However, some black-capped chickadees flew along with us.  We knew it wasn’t to console us though.  They hoped we might have brought some seed for them (a common practice of walkers we discovered in this part of Ontario).

At the end of the day, we took the ferry back across to the mainland and tallied the number of bird species we’d seen that day.  It was better than we expected, given the very slow start in the morning due to the fog.

Even though we didn’t have any interesting bird photos the entire day,… 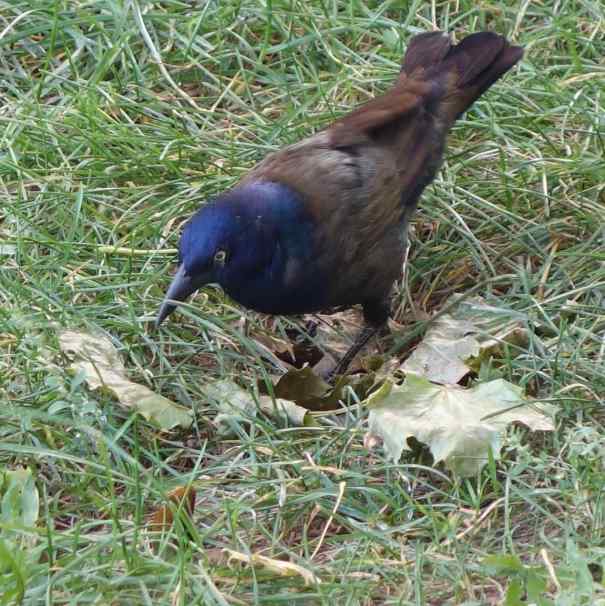 …the next day we came across one of the most beautifully colored, ordinary birds we’d ever seen – a common grackle.

We had to laugh at our bad luck to choose a foggy day for our big trip to watch birds – and that the one wildlife photo of the day was a frog.

7 Responses to Travel through a fog