Time for the little things while traveling

Posted on April 27, 2018 by simpletravelourway

When traveling, it’s good to take time for the little things that nourish the soul.  Easily said, but not often done.   In the rush of trying to experience an exciting new destination, most travelers are unprepared to pause for those little soul-satisfying moments.

After 15 days in Florence we decided to just take a long, quiet walk along the Arno River with no stops at famous sites.  For us, spending time outside surrounded by greenery nourishes our spirits.

The discovery of one lone poppy seemed magical, but taking the time to look into its interior was as brilliant as it’s flashy red exterior.

We hoped to enjoy the warm, sunny day and maybe see a few birds along the way. As soon as we stepped onto the sidewalk by the river, we looked over the old, stone wall and saw barn swallows swooping and swirling over the greenish-blue water.  We watched a Eurasian moorhen dart under bushes in the thin green strip of land below us along the bank of the river.  We stood patiently waiting and watching.

How could we get down to that lovely strip of narrow land wedged between the stone wall and the river?  We wanted to see everything up close instead of just observing from the sidewalk above.  When we leaned over the wall, we could see a ramp in the distance leading down to a “beach” with sunbathers and the grassy strip of land.  That’s where we headed on a warm day in April.

What a wonderful place! We were in the heart of Florence, Italy, and we only saw a few other people in that large grassy area.

We watched a female mallard headed towards a little stream followed by her three chicks, a hooded crow hanging on a slender tree branch, and a greenfinch in a bush.

As we waded through the tall grass, a web had been spun – just barely discernible. The spider was so small and so still. Was it still alive?

A moment later, we saw the small red dot of a beetle, barely hanging on.  Then we glimpsed another and still another – all on just one plant.

There was more to see than glorious flora and fauna on this land: ugly trash.  We could only imagine that passersby on the sidewalk above tossed juice boxes and food wrappers down.  It was a good time to recall a blog post by Old Plaid Camper read that morning:

“On Earth Day, we all picked up a single piece of trash, some garbage somebody else overlooked or dropped by mistake (because in this story, littering is never deliberate…)  And then we all did the same thing the next day, and the next! One wonderful day, we were unable to find any garbage, because it had all been picked up, and no more had been dropped. The end.”

Inspired by Plaid Camper, we started to pick up the litter.  Why stop at one piece, we thought?

We continued walking to where the strip of land narrowed and ended almost under the Ponte alle Grazie Bridge.  We snapped a photo of the next bridge hanging over the Arno River, the Ponte Vecchio – icons of Florence. 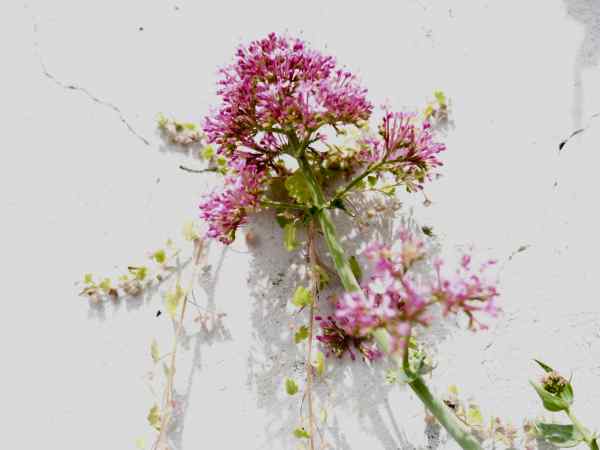 This time our route back to the ramp was along the stone wall with occasional flowers growing up or out of the wall.

We continued our trash pickup and as luck would have it, as we came up the ramp to the sidewalk, a recycling station was just across the street.

We spread out our collection to record with a photo before depositing it all in the appropriate recycle and trash containers.

Who wants to waste a travel minute with so many wonderful new things to see?  We have found that for us, sustained travel is only possible when we balance sightseeing with the quiet soul-satisfying moments.

11 Responses to Time for the little things while traveling