Posted on May 12, 2018 by simpletravelourway

On a walk in our new Florence neighborhood – the Oltrarno area – we discovered something rather mysterious. A very long and very high wall extended the length of several city blocks near our apartment. We could see glorious mature trees surpassing the wall in height, and we heard birds calling. Could it be a garden?  If so, there were no openings and no entrance to indicate how to gain entry. 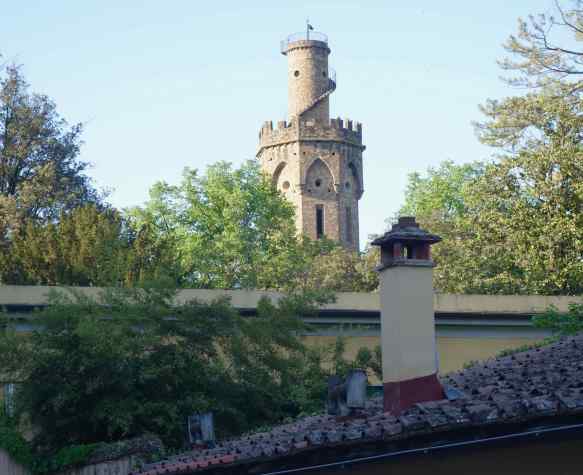 Then we spied the most fantastical tower behind the wall.  That only made it all the more mysterious.

When we returned home, a search on google maps indicated it was Giardini Torrigiani.  More searching and we discovered that the hidden garden is private, but, with an email request, we might be able to take a tour, the only way to gain entrance.

We emailed our request and days passed.  The next week we received an email from Vieri Torrigiani Malaspina inviting us to join a tour on one of our last days in Florence.

In preparation for our visit, we read all that we could about the garden. 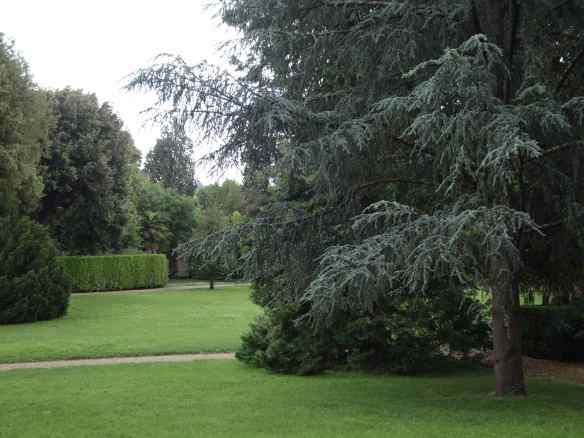 The botanical garden was famous in the 16th century.

One hundred years later, Pier Antonio Micheli, the founder of scientific mycology and noted botanist, worked in the garden.  In 1716 he and others founded the Italian Botanical Society.

When Pietro Torrigiani (1773-1848) inherited and expanded the garden, he hired a famous landscaper, Luigi De Cambray Digny, who changed the look of the garden to the popular English-style.

The more we read, the more excited we were to see the garden.  Giardini Torrigiani is the largest private garden in Europe, still owned by the Torrigiani family who live within its 27-acre (7 hectares) walled estate.

Vieri greeted us at a door in the wall and introduced us to the others taking the 1.5 hour tour.  As we strolled, he told us of his passion and commitment to the garden. 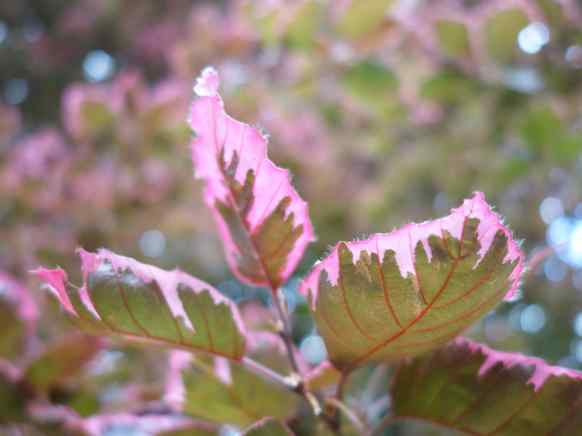 Many of the mature trees are now 300 years old.  One of the trees we especially wanted to see was the Fagus tricolor, a type of European beech.   “The old French cultivar called ‘Tricolor’ (green leaves edged with pink changing to white) is extremely rare and may no longer be circulating to any extent in commerce in the U. S.” 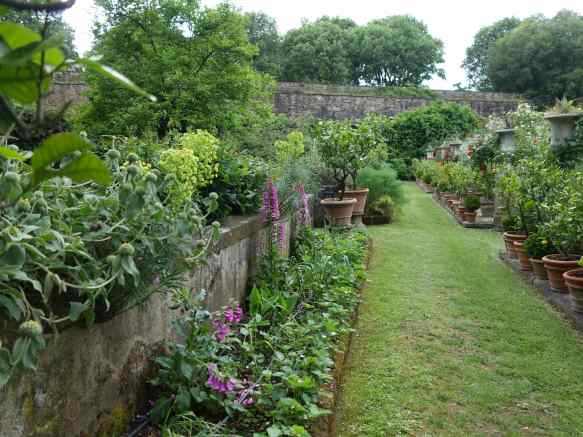 The garden is large enough to have areas devoted to flowerbeds, several greenhouses, and extensive lawns with mature trees.   Sculptures and small buildings were prominently featured across the garden. 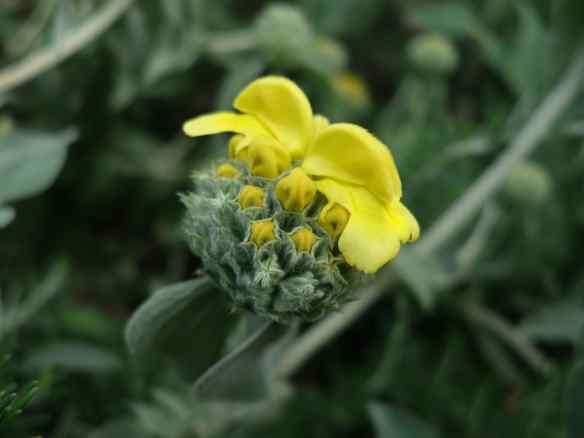 We weren’t familiar with many of the trees, plants and flowers, like this Turkish or Jerusalem Sage (phlomis).  We did get a laugh when Vieri pointed to a vine growing up a wall, the Virginia Creeper, one of the few plants we most definitely knew. 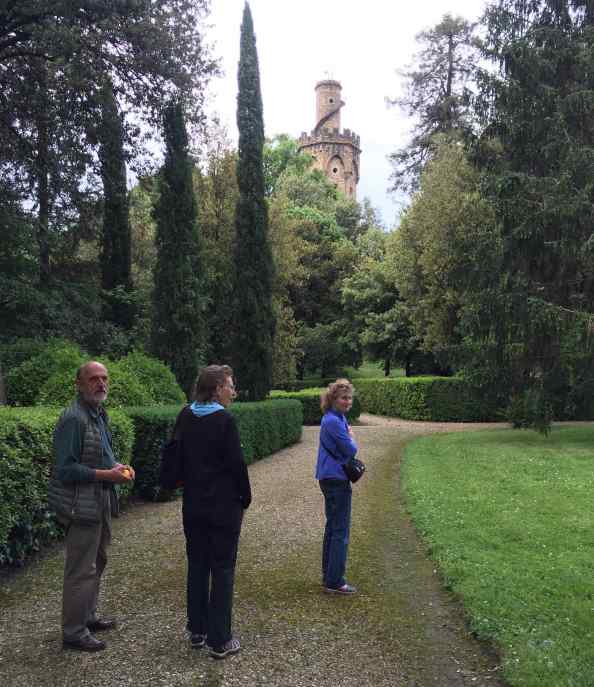 The builder of the bell tower at the church of Santa Croce, Gaetano Baccani, was hired in 1821 to build a tower in the garden.  This was the tower we had first viewed from outside the walls.

The tower contained a library and astronomical instruments.  It had a mechanical lift, as well as circular stone steps.  Sadly, the tower is no longer safe for visitors.

Near the base of the tower, and protected by old stone walls and a bastion built by Cosimo Medici in 1544, was a crypt.  Vieri unlocked it so we could go inside.   Before it could be used, Italian laws changed, so it was never put in use. 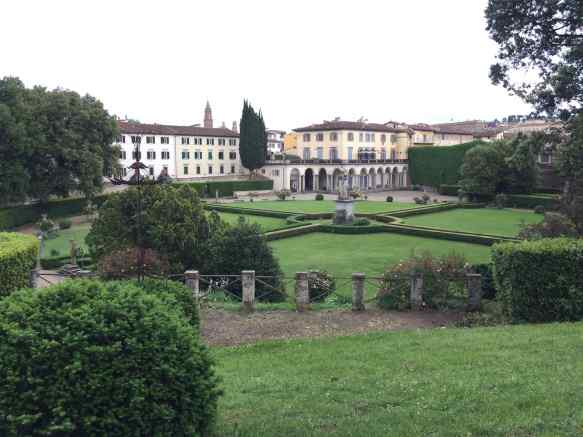 We walked on a shaded path and looked over to his cousin’s garden, still within the walls. 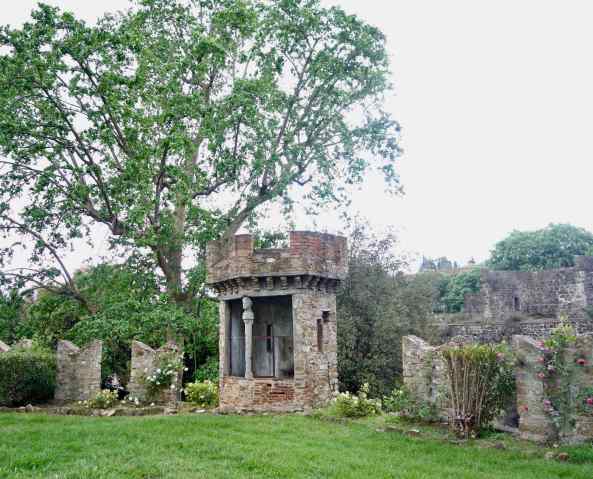 A moment later we looked in a different direction and saw rose bushes planted by a decorative low wall and a little building with who knows what purpose?

All the while Vieri told us stories about the garden, the family, and the importance of all that had taken place in the garden.  We were spellbound.  There is a sculpture in the garden of Seneca, the Roman philosopher, and the young Pietro Torrigiani. Pio Fedi, the sculptor, was known for his work, “The Rape of Polyxena” in 1865. We had just seen that piece in the Loggia dei Lanzi, Florence.

At the tour’s end we were all invited into Vieri’s house for afternoon tea – a lovely, hospitable way to conclude our visit to the garden.

In our many years of traveling, we could not think of another experience we had that was quite like this. The botanical garden itself was magnificent.  The historical background was fascinating.  And Vieri was a most charming host for an incredible tour.

7 Responses to Hidden and private